WHAT ARE THE DIMENSIONS OF THE TIGNES SUPERPIPE?

WHAT MAKES THE TIGNES SUPERPIPE UNIQUE?

Its dimensions, pure and simple: it’s the only superpipe in France capable of hosting an international level competition, for example, the X Games between 2010 and 2012, and this year’s Halfpipe World Cup Final.
There are only three superpipes in France:

However, the Avoiraz halfpipe isn’t as high: 5.5 m.

The Tignes superpipe is also uniquely accessible: it is located at the foot of the slopes, near the base village. It’s perfect for fans who come to support the athletes in competition! Set against the backdrop of the Grande Balme, it’s a really magical setting, both by day and by night.

It’s renowned in the world of freestyle: the best riders compete here, there’s a great party atmosphere during the night-time final and the view is magnificent.

WHAT ARE THE STAGES INVOLVED IN CONSTRUCTING A SUPERPIE?

HOW LONG DOES IT TAKE TO SHAPE A SUPERPIPE?

For the 2nd stage alone (pushing the snow), there are two drivers, working all night for 3 weeks (so roughly 250 hours of grooming). And then, it takes me around 2 days to shape each wall, depending on conditions (so 3-4 days in all to cut the curve).

Not to mention the time needed beforehand to produce the artificial snow....40,000 to 50,000 m3 of snow produced by 4 snow guns, dedicated exclusively to the superpipe!

TYOU MUST HAVE BEEN RELIEVED BY ALL THE HEAVY SNOWFALL IN WINTER 2018?

Quite the contrary! The best snow for building a halfpipe is artificial snow. Natural snow is too soft to built a “concrete” halfpipe which the riders need to express themselves. So this winter, first of all we had to remove all the natural snow from the pre-formed structure and mix it with artificial snow, before putting it back into place. However, large quantities of natural snow were ideal for adding final details: starting mound, platforms etc.

WHAT PARTICULAR FEATURES MAKE A SUPERPIPE POPULAR WITH ATHLETES?

That’s why the U shape is so important: they mustn’t lose speed when transitioning between the curve and the flat, and they mustn’t go flying off, when they exit the coping. 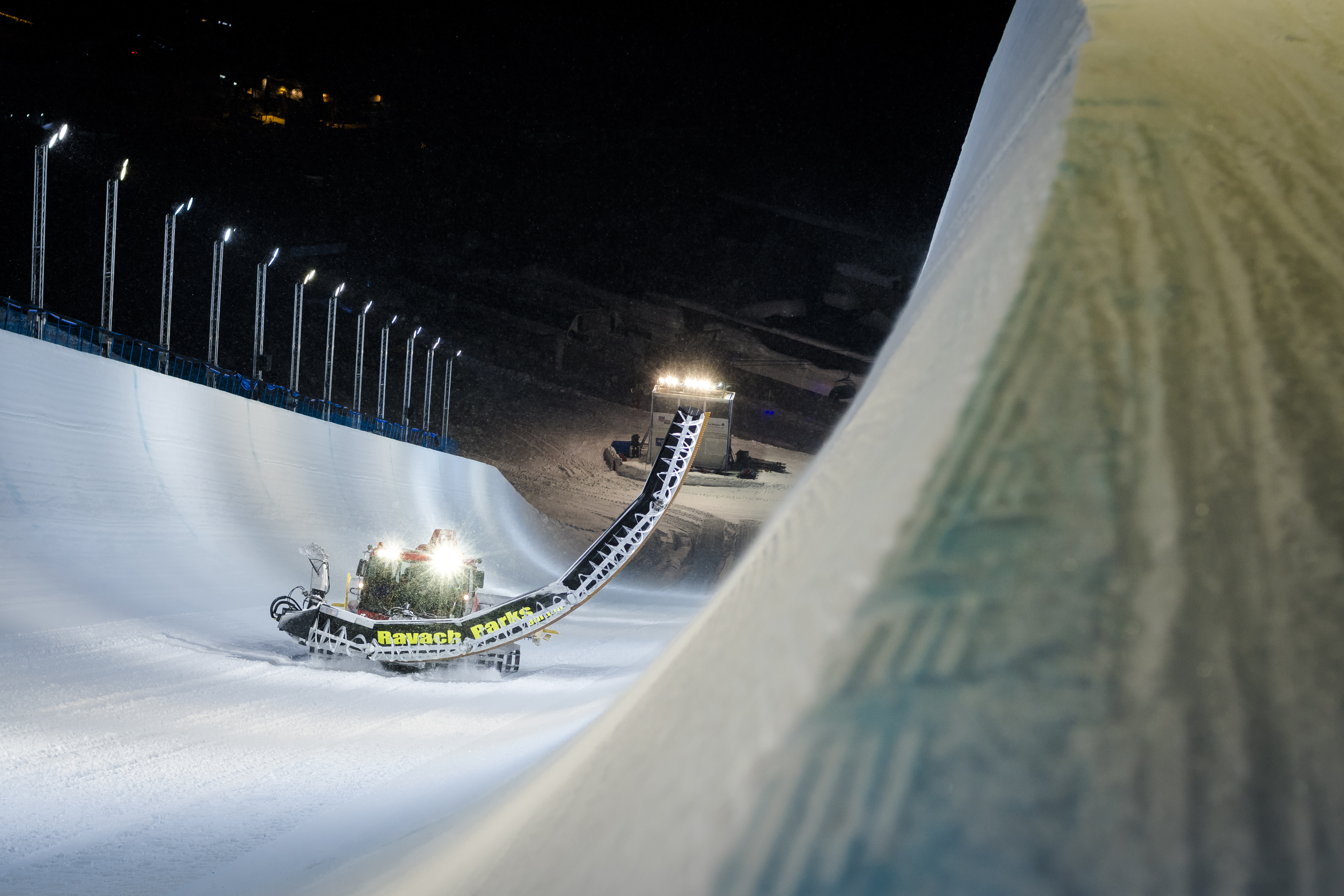 THAT SOUNDS EASY! ISN’T IT JUST A MATTER OF POSITIONING THE TEMPLATE AND YOU’VE GOT THE RIGHT SHAPE?

Hmmm... it’s not quite so simple! The Zaugg has 12 different blade positions, so you need quite a bit of experience to build the perfect curve.

YOU BUILD IT....BUT DO YOU ALSO TEST IT?

It’s the riders who test the superpipe during pre-competition training. They tell me what works and areas that need to be refined. For example, it’s easier to reduce the curvature of a halfpipe rather than increasing it. So I prefer to make a pipe that is slightly more open at the outset and then make adjustments depending on rider feedback.

But I have previously had the the chance to test the superpipe before a competition when no one else was available. But, unlike a pro who gets up to 5 or 6 m above the coping, I get my thrills at just 1m! Everyone, irrespective of level, can experience an adrenaline rush, even by staying within the curve without exiting the coping. It’s already pretty awesome...

WHAT KEY QUALITY DO YOU NEED TO BE A SHAPER?

Patience! Unlike a snow groomer who gets to wander around the resort, and admire the landscape, a halfpipe shaper spends hours just going up and down the same 200m patch of ground...You really need to love what you do!

I like to say that we create ephemeral art, a bit like a sandcastle: we spend entire nights building something that is eventually going to be destroyed… so we can rebuild it, and make it even better, next year.

When you work at night, you’re often alone. I love those quiet moments! There’s a unique atmosphere; you see things that other people don’t see (like the first light of day at around 6am). And sometimes you have unusual encounters: just a few days ago, as I was coming off the pipe, I came face to face with a fox. It was completely silent - not a sound; it was just him and me. It was really quite magical!